Like so many others, when I received my original ‘ethnicity’ results from FTDNA, I was flummoxed.  Back then, the ethnicity calculator was called, “Population Finder” and it pigeonholed me as being 94% Orcadian and 6.08% Middle Eastern.  Middle Eastern, as in…Palestinian, Adygei, Bedouin, Bedouin South, Druze, Iranian, Jewish, Mozabite.

When I relayed my results to my cousin Michelle, I got the reply of, “WHAT??? I didn’t see the Middle Eastern connection coming.  I am loving this.”

I didn’t see it coming, either.  I was also surprised by the 94% Orcadian.  On average we carry about 1% of the DNA of our 4th great grand parents, so I was aware that not everything in our paper genealogy would still be in my genes.  For Michelle and I, our 4th great grandparents were born between 1760 and 1820 and the majority of their descendents made their way to Iowa.  Generally speaking, the DNA of any ancestor from before that point has been diluted out of our genes.  However, we had plenty of ancestors that came after 1820 that that were anything but Orcadian or Middle Eastern. 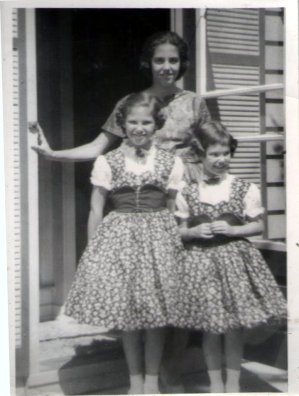 “What do you think?” She asked me that every which way possible, but I didn’t know what to think, so I contacted the creator of Population Finder, Dr Doug McDonald. After all, we are also part Shawnee, although that ancestor entered the tree before the 4th great grandparent cut off.  If anyone would be able to sleuth out those or other small percentages it would be Dr McDonald.

After he looked at my raw data the answer came back that Chromosomes 1, 6 and 8 represented some Middle Eastern signals. He concluded I was mostly, “English with a touch of other northern European.” His best fit estimate broke the Northern European into Polish, Lithuanian and German.

With Dr McDonald’s  inclusion of Poland, Lithuania and Germany, things were making a bit more sense, as my maternal side has a fair amount of Germanic ancestry, including a great grandmother, Erna Georgi,  from what is now Poland.  I wasn’t sure what had happened to the rest of our ancestors, but as I was frequently warned, it was best to take these ethnicity estimates with a grain of salt.

When FTDNA came out with the next-gen ethnicity calculator, MyOrigins, I was back to being severely flummoxed about my results.

Where did all that Orcadian and English and Middle Eastern (that didn’t make sense to begin with) suddenly go?  I was disturbed enough by my results to have my dad, who is half Irish and half Belgian, tested.

While I was relieved not to be a non-paternal event, I couldn’t imagine how I had no British Isles and my dad only had 14%.  We couldn’t have that much Scandinavian, no matter how many Vikings had plundered Ireland. Where did all the non-Irish and non-Belgian come from? Meanwhile, many who had tested with FTDNA and expected to get fair amounts of British Isles were experiencing similar problems and being classified as Western and Central European. Scandinavians and Germans were coming in as British.  From anecdotal experience, some of which is detailed at FTDNA’s Forum thread MyOrigins Discrepancies, my family was not the only one suddenly questioning the fabric of its make up.

With the return of my grandmother’s MyOrigins results, I was able to cease wondering if my dad had been secretly adopted, sprinkle an unhealthy dose of salt over the MyOrigin ethnicity issue, and hand the salt shaker back to FTDNA.  My grandmother, who is mainly  Irish, came back with the ethnic make up we expected.

My dad and I had of course inherited the exact same DNA MyOrigins classifies as British in my grandmother, but as Scandinavian in us.  As MyOrigins deciphered her DNA as British, her son should have had about  50% and her grandchild about 25%.  As MyOrigins doesn’t see our accounts, and therefor our DNA as ‘linked’, no such adjustment, or ‘phasing’ was conducted.

Essentially, the ethnicity calculator looked at each set of data independently, and tried to determine which reference populations each of us were most like, and at what percentage.  Sometimes it was close, and sometimes, not so much.  As my grandmother is less mixed than my dad, and far less mixed than I am, the calculator seems to have been less thrown by her relatively homogenous DNA that clustered comfortably with its British Isles reference population.

Sadly, while the science behind ‘cousin matching’ is sound the testing companies do not make it crystal clear that the ethnicity estimates are just that, estimates and that they change over time as the science matures.  If you are awaiting your results, or have already received them, do yourself a favor and create an account at Gedmatch.  You will be able to upload your raw data and avail of their admixture, or ethnicity tools.  Each of these tools produces different results and tends to be suited to particular populations (ie Eurogenes is best for Europeans, Ethiohelix is best for African ancestry etc).  It is a free service and can potentially provide a more in-depth breakdown of your ancestral populations than any of the three major testing companies today.

For further reading, Razib Khan and Rui Hu, the creators of MyOrigins, have described their methodology and their reference populations in their white paper.