I’ve now had the luxury of having had both my 94 year old grandmothers tested, which affords me the opportunity to explore several suppositions about genetic genealogy and inheritance:

Grandmother Leona ticks both of the first two categories.  Not only did her mother Erna not immigrate until 1907, she was from a “German” population living in what is now Poland and had the relatively rare haplogroup of W3.  The rest of Leona’s background is from a family of Alsatians who immigrated in 1855 and from a prolific Norwegian family from Gran, Oppland.  Some of the Norwegians are known to have immigrated to Iowa and North Dakota.

Grandmother Gladys, meanwhile, is mostly Irish with a dash of French and German.  ALL of her known family lines have been extremely prolific and in theory that should greatly increase the odds of garnering matches.

Grandma Leona came in with only 238 matches, 65 of which are X-matches. No one on her match list, beside already known family shares her rare haplogroup.

Grandmother Gladys on the other hand has 546 matches.  88 of them are X-matches. At this time we are waiting for the return of her mtDNA results.

None of Gladys or Leona’s 4th or closer cousins fall below the 10 cm mark, which is considered to be a 99% positive match. Based on those figures, excluding close and immediate family, Leona has 37 matches that are almost certainly related within the last 6 generations, while predominately Irish Gladys has 164.

How the Countries of Origin Stack Up

For Leona, having ancestry from distinct areas means it is easier to guess at a glance the most likely line her matches share.   Also, it is sometimes immediately obvious where her matches originate, either by their email addresses or   names and locations of ancestors from only a single known area. Leona’s match list is fairly clear cut. 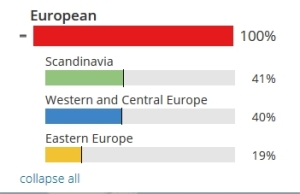 Most of the above matches are currently living in the regions of shared ancestry.  I was pleased to see several native Russians and Poles, as well as a Lithuanian. The remainder of Leona’s matches either have family names from a variety of areas, or no family names/family tree listed.  I cannot over emphasize how important it is to enter you ancestral names and to add a family tree to your account.  It will vastly increase your chances of finding matches, making connections and adding to the knowledge of your family’s origins.

The matches in Glad’s list are more difficult to discern as the vast majority of them are of Colonial American stock.  Among her 3-5th cousins or closer, she has matches living in the several regions.

Her match list is packed with surnames like Magee, O’Brien, McConnell, Walsh, MacKie, Ferrell, Kane and FitzGerald.  Time and again, her Irish cousins, even the colonials, lead to Counties Mayo and Armagh, where her ancestors are known to be from.  They have also given us further clues leading to possible origins in Down, Fermanagh and Tyrone.  My youngest son, whose father is Irish born, also has a large proportion of native Irish/UK/NZ and Australian matches.

Do we really inherit 25% from each Grandparent?

The quick answer is, “Not exactly.”

Time and again segments are passed down through the generations almost unaltered or they disappear entirely from one generation to the next.  Using the matrix method, here are a few examples of the type of pattern I am seeing across the board: 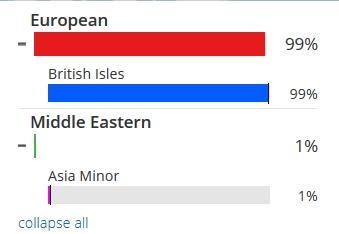 Depending on your expectations, I will let you be the judge.  At least 16 of my Irish grandmother’s 61 3rd-5th or closer cousins are living in the area (or NZ/AU) that FTDNA designates as the British Isles. Considering Ancestry will not sell to customers outside of the United States and the price of a 23 and Me kit in the UK is £125 ($195) before shipping, your best shot of connecting with Irish or British cousins remains with FTDNA.

Grandma Gladys definitely won out in the quantity of matches portion of the duel.  However, Grandma Leona has some intriguing Eastern European matches that I am excited to begin investigating.  In the end, I think the clear winner was me for having two grandmothers, both blessed with longevity, who have been able to contribute to our family’s story.