updated 11 Sept 2015 to include maternal matches

That seems pretty straightforward, doesn’t it?  Traits can skip generations and not be expressed, even though they may be there, hiding, in your DNA. The DNA itself, however, cannot skip generations. If your parents didn’t have it, neither can you.

When I began my DNA adventure trying to figure out who I inherited my matches from was half the fun.  Unfortunately, I knew they were only guesses and for quite a few of my matches I had no guesses at all.

I manage several accounts and use Genome Mate to keep track of each person’s matches. In Genome Mate, not only can I look at each profile’s matches chromosome by chromosome, but I can call up additional information by clicking any match’s name.  Rather than having to jump from profile to profile to see which matches were inherited from my paternal grandmother or only my dad, the Profile Overlaps box gives me that information at a glance:

In this example on chromosome 9, my grandmother G Duffy, my dad, myself and my sons all match Karen at 13 cM.  Genome Mate allows me to apply a feature, the In Common With  (ICW) label to organize our matches.  In this same example there is a ? beside my grandmother as I don’t yet know whether she inherited that segment from her mother or father.  For my dad it is a M (maternal) match, for myself it is PGM (paternal grandmother) match and for my sons it is MGF (maternal grandfather) match.  With each match labelled, I know which quadrant of the profile’s tree to look in, no matter whose profile I am handling, to narrow down the search for a common ancestor.

Why Aren’t We Matching?

When my paternal grandmother’s results came in I was able to divide our piles even further and that was when I noticed a problem. Some of the matches I’d attributed to my maternal side, as they didn’t match my dad, matched my paternal grandmother.  When I checked my dad’s account at FTDNA, I realized it wasn’t an oversight. The matches my grandmother and I shared, and often one or both of my sons, did not appear on his Family Finder Match list. 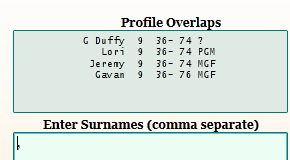 Had there been a problem with his sample?  Was it a result of no calls?  FTDNA won’t allow a match to appear unless it meets minimum requirements, and all of the matches were imported directly from our respective match lists at FTDNA.

Which Matches were Genuine?

Some DNA companies provide phasing, but FTDNA does not.  Since you can’t inherit anything your parents didn’t give you, some matches needed closer scrutiny and begged the question, “Which matches were genuine?”

The shared segment between Howard, my grandmother, my sons and I in Figure 2 is on chromosome 9  and is 9.5 cm.  Pay close attention to the start and stop points:

Notice they are very similar to the start and stop points also on chromosome 9 with Karen, from Figure 1:

Gladys, Howard and Karen appear to share an ancestor.   When looking at each match in isolation, the conclusions seem straightforward:

Manual Phasing for our match with Howard:

Manual Phasing for our match with Karen:

For Gladys, Howard and Karen to share an ancestor, my dad can’t match with one and not the other.  Since he matches Karen for the entire 13 cM segment she shares with Gladys, but does not match Howard, it appears that Karen and Gladys are genuine matches.

Despite the size of the matching segment, Howard can be considered either a false match, or for my dad a genuine match not meeting the minimum 20 cM requirement at FTDNA.  To be certain, we would need to compare our kits at Gedmatch.  To this date, every match at FTDNA who has uploaded their kit to Gedmatch has been a match for the correct generations (example: grandmother/father/self/child) even if they are missing from the match chain at FTDNA.

As you can see, this wasn’t an isolated event:

The shared segment between my grandmother and I in Figure 3 is 8.3 cm.

The segment in Figure 4 is 8.1 cm and is shared between my grandmother, son and I.

The shared segment in Figure 5 is 8.6 cm and is shared with both my sons, my grandmother and I.

In Figure 6, my grandmother Leona is compared against her daughter Jackie, myself and my two sons.  Jeremy’s stop point of 89 matches Leona’s DNA, but was not inherited from me.

A similar situation occurs in Figure 7 where my son Gavan inherits his start point from his father rather than me or his great grandmother Leona:

With the two daughters of my maternal grandfather added to the mix, the number of false matches rose.  Since Jackie and Diane are half sisters, and both daughters of Jim, and Jackie’s mother Leona has also tested, the group has been invaluable for weeding out false matches.  Again, for certainty, matches must be checked in a 1 to 1 comparison at Gedmatch rather than relying on FTDNA.

Chromosome 12 was chosen at random, and the process produces similar results across the board.

For Chromosome 12, all paternal matches have been removed. As she has tested, we automatically know which segments are inherited from Maternal Grandmother (MGM) Leona.  What isn’t inherited from her is likely inherited from Maternal Grandfather (MGF) Jim.  Since 2 of Jim’s daughters, sisters of my mother have tested, anything that matches them but not Leona can be considered a genuine MGF match.  Anything that doesn’t match Jackie or Diane, may have been inherited from my mother, is a false match, or is potentially a match not meeting the minimum FTDNA match requirement but will prove a genuine match at Gedmatch..

To determine whether a match is valid, my DNA is compared against start and stop points of known relatives:

On Chromosome 12 all the matches except for 2 cluster neatly into groups that clearly match Jackie and Diane or Leona.  That leaves Camilla and Patricia needing closer examination.

Patricia: 118-123 8.1 cM.  She doesn’t match Leona.  Jackie and I share the segment 102-132, known to be inherited from Jim, but Patricia doesn’t match Jackie. Either Patricia is a false match, or she and Jackie don’t meet the minimum 20 cM requirement at FTDNA.

With 4 generations and two pairs of half siblings tested, it becomes clear that phasing is an extremely valuable tool. Generally, I prefer to work with matches 10 cM or more, and my experiment with phasing has reinforced that idea.  However, phasing has also proven useful in confirming matches below 10cM (I have only focused on matches above 7 cM), some of which have held on through all 4 generations.

*More information about Identical by Descent inheritance can be found here.

The Family Finder relationship predictions require a minimum number of results in a row to be identical in order to identify that the segment is likely to be IBD.”

IBS as, “IBS stands for Identical By State, meaning the DNA matches by coincidence. When two individuals share numerous individual results without being related, those results are IBS.”

3 thoughts on “Not a Real Match? An Update Using 4 Generation Phasing”