One of the pleasures of having multiple generations tested is the ability to make comparisons.  Like many DNA testers, I’d love to track the source of each match’s connection and map as much of my ancestors’ DNA as possible. When a new match arrives the first task is to determine whether it is a maternal or paternal match, which grandparent it might belong to, and if possible, to assign a more distant ancestral couple.

The more matches you have to work with, the more likely you are to connect with those that will help determine the source of your DNA.  Due to the FTDNA match requirement of at least 20 cM total shared, each kit I manage has many more FTDNA matches at Gedmatch than it does at FTDNA. In some cases, these FTDNA kits match myself and my paternal grandmother Gladys, but not my father Steve.  To determine whether these matches are false or victim of the FTDNA 20 cM total requirement, I took the advice of the larger community.  It was a simple matter to search for FTDNA kits at Gedmatch that matched grandmother Gladys and myself but not my dad.

Regardless of where you have tested, at Gedmatch it is possible to lower the minimum threshold and compare kits on a 1 to 1 basis to tease out or force matches, depending on your perspective.  Is it wise to do so?  According to an ISOGG article on phasing, “It may be reasonable to map some segments in the 3-5 cM range if both the parent and the child share that same segment with the relative but caution is warranted when mapping segments that don’t contain at least 700 or more SNPs because some matching segments could be IBS and not IBD.”

Normally, I do not lower the minimum defaults at Gedmatch nor do I recommend doing so.  If you are reducing the threshold at Gedmatch to compare with a suspected relative, to ‘prove’ a match below Gedmatch’s default levels, you are taking a big risk and not necessarily proving what you intended.  However, in this special case of using 4 generations to illustrate missing matches, small matches, and small matches that could appear to some as valid and belonging to a specific ancestral couple, for all comparisons I dropped the minimum levels to 350 SNPS and 3 cM.

Malcolm fit the pattern of matching my grandmother Gladys, myself and one of my children at FTDNA, but he didn’t match my dad Steve. It was a different story at Gedmatch.

As seen by comparing Figures 1-3, Malcolm, Gladys and Steve all match on the highlighted portions of chromosome 1.  I also have an overlapping segment on chromosome 1 as does my son Gavan.  Are the small, non-highlighted segments valid?  Generally, I consider them to be IBS. and whatever their origin, not large enough to pursue. 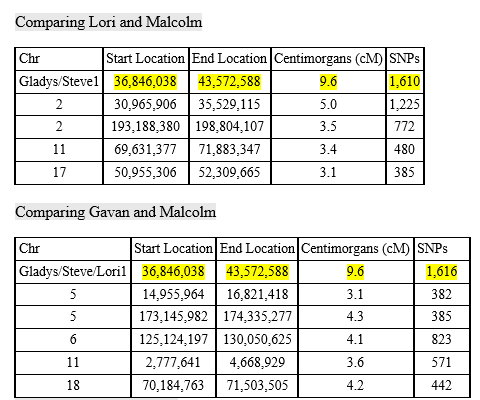 My son Jeremy also matches Malcolm at segments up to 4.4 cM/784 SNPs, none of which were inherited from his grandmother Gladys or our common ancestor shared with Malcolm.

Kay, too, fits the pattern of matching grandmother Gladys, myself and one of my children at FTDNA, and while she matches him at Gedmatch, she doesn’t match Steve at FTDNA. 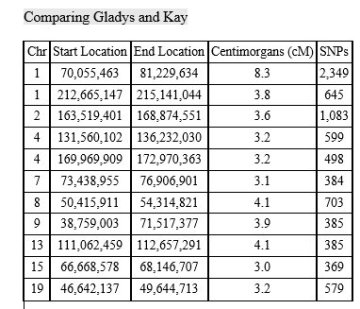 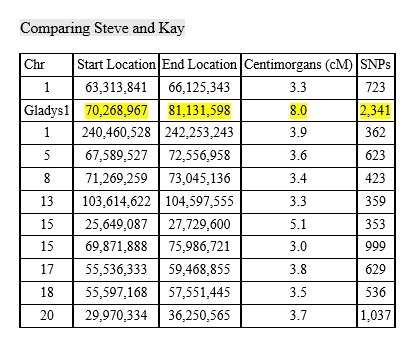 When comparing Figure 1 and Figure 2, Steve’s match on chromosome 1 occupies an area within the same start and stop points as the segment he shares with Gladys.  In Figure 3, you can see I also match Kay on chromosome 1, but my start point is 69, 937,274.  The DNA I match with my dad and grandmother has a start point for my dad of 70, 268, 967.  The differences in those start points makes it appear as though I share 8.2 cM of DNA as opposed to the 8.0 cM of DNA my dad shares with Kay.  Although a trivial amount, it could indicate my dad having no calls in that portion, or it could be a case of recombination.

Meanwhile, Kay matches my son Gavan on the same 8 cM segment he shares with me/Steve/Gladys.  On the other hand, my son Jeremy shares 5.6 cM/691 SNPs on chromosome 9 with Kay that he also shares with me but not my father or grandmother.  Jeremy and Kay may have a common ancestor through my grandmother on paper, but it is not reflected in their phased DNA results.

Bonnie also matches Gladys at FTDNA but does not match Steve.  Again, Steve has another new match at Gedmatch.

On chromosome 1, Bonnie, my dad and I share 6.1 cM/362 SNPs that we don’t share with my paternal grandmother Gladys.  362 SNPs falls well short of the ISOGG recommended minimum of 7 cM/700 SNPs. Chromosome 18 shows a match between Bonnie and myself at 3.2 cM/514 SNPs.  My dad also shares a match with Bonnie on chromosome 18 at 3.4 cM/492 SNPs.  My start point on chromosome 18 precedes the start point for my dad, and is another example of possible no calls or IBS.  Either way, neither small segment was inherited through Gladys and her ancestor in common with Bonnie.

At reduced threshold levels of 3cM/300 SNPs, Bonnie also matches Gavan on segments that she only otherwise shares with me and not Steve or Gladys.  Bonnie and Jeremy share segments that are shared with no one else. 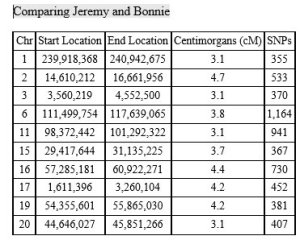 In this example, at FTDNA Sean matches only my grandmother Gladys.  However, at Gedmatch he is also on my dad’s match list. 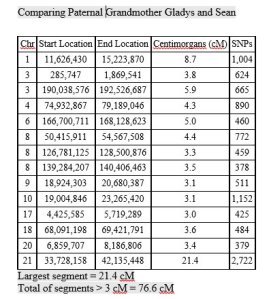 As seen when comparing Figure 1 and Figure 2, Steve matches an 8.6 cM segment on chromosome 1 with his mother Gladys.  On chromosome 17 we see another small overlap:  3.1 cM/465 SNPs.  The start points vary. 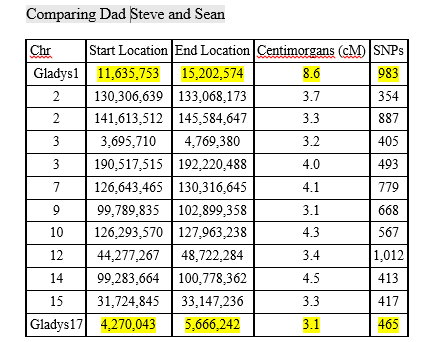 Neither I nor my children match Sean at FTDNA or Gedmatch, but our results do represent what type of results we could expect if we were lowering thresholds and comparing 1 to 1 with out the safety net of additional tested generations and their data.  In Figure 3, my results are added and compared against my grandmother and father.  While Sean and I have numerous ‘matches’, up to 5.1 cM,  I didn’t inherit the vast majority of them from my grandmother Gladys or the ancestor we share with Sean, and none of them fall within the phased extreme minimum recommended range of 3-5cM/700 SNPs. 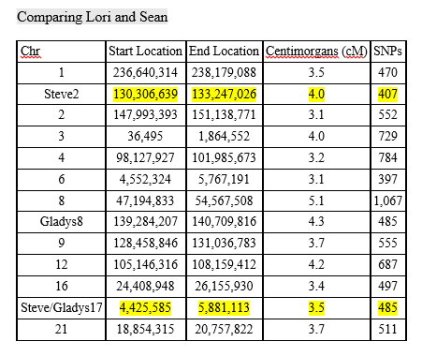 In Figure 4, my Irish born son Gavan is compared to Northern Irish Sean.  He also has matches, with segments up to 4.4cM/683 cM with Sean, although none of them were inherited from Gladys or the ancestor we share with Sean.

Similarly, my son with deep American Colonial ancestry Jeremy also matches with Northern Irish Sean at up to 5.4 cM/838 SNPs, but again, none of the matches were provided by Gladys and our common ancestor.

Previously, I’ve been concentrating on distant cousin matches that could easily be missed by FTDNA’s minimum requirements but could appear at Gedmatch with single blocks of shared DNA above 7cM/700 SNPs.  In the following examples I am concentrating on another multi-generationally tested family.  Their patriarch, CK is my grandmother Gladys’s 2nd cousin through common ancestors Henry Kane and Katherine Forrestal of County Mayo, Ireland.

Gladys and CK, as second cousins, share abundant DNA in excess of 7 cM/700 SNPs from Henry and Katherine.  They also share 2 segments above 5cM/700 SNPs on chromosome 15.

Two of CK’s children, HaK and HeK have also tested. In Figures 1 and 2, we see the DNA they share with both Gladys (G) and CK (C) highlighted, as well as segments that are partial overlaps with Gladys and CK.

HeK and HaK both have children that have tested.  HeK’s son does not appear on any of the match lists of Gladys, Steve, Lori, Jeremy or Gavan.  However, HaK’s children, KaK and KeK do and are shown below, with the highlighted portions illustrating the segments they share with Gladys (G), their grandfather CK (C) and their father HaK (H).

Gladys(G) has a grandchild and Steve (S) a child who has tested (me), so I am also able to compare my segments against the group to ferret out DNA I’ve inherited from Katherine and Henry via my grandmother Gladys.

In the above example all highlighted matches except one on chromosome 15 match Gladys, Steve and CK.  The smaller segments match neither Gladys nor Steve.

My sons make up the 4th generation.  Below, Jeremy has one match at 50.3 cM/13,569 SNPs shared by CK, Gladys, Steve and myself as well as one that is 3.4 cM/492 SNPs. Two of the non-highlighted matches he shares with CK but not his mother or the rest of the group are in excess of 700 SNPs.

Gavan has 4 matches shared between CK, his mother, grandfather Steve and great-grandmother Gladys. None of the non-highlighted matches Gavan shares with CK but not the rest of the group are in excess of 700 SNPs. 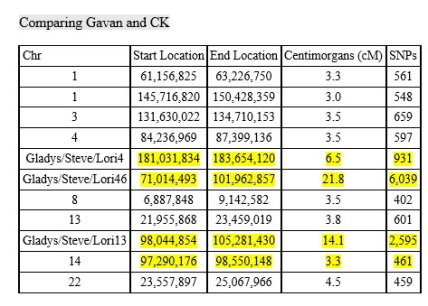 Determining whether a match is valid is clearly extremely important when working with your results.  Making sure you have added your kit to Gedmatch, whether you have tested at Ancestry, 23andMe or FTDNA is an essential part of the process.  I haven’t yet gone through all the FTDNA matches missing from my dad’s list that Gladys and I share, but I have yet to find a FTDNA match that has also uploaded to Gedmatch that he doesn’t also match above 7cM/700 SNPs.

Recombination, crossover, IBS, IBD and phasing are important concepts all budding genetic genealogists must grapple with.  Minimum acceptable segment length will doubtlessly continue to be debated and redefined.  Certainly, if you are using reduced thresholds/small segments and haven’t tested a parent(s) you are taking a very big gamble.

For further reading you might be interested in: Small Segments and Triangulation by Jim Bartlett,  Hotspots and Crossover,  and Anatomy of an IBS Segment and What a Difference a Phase Makes by Ann Turner.  You might also wish to add your voice to the subject at the FTDNA forums.

2 thoughts on “Missing and Small Matches”