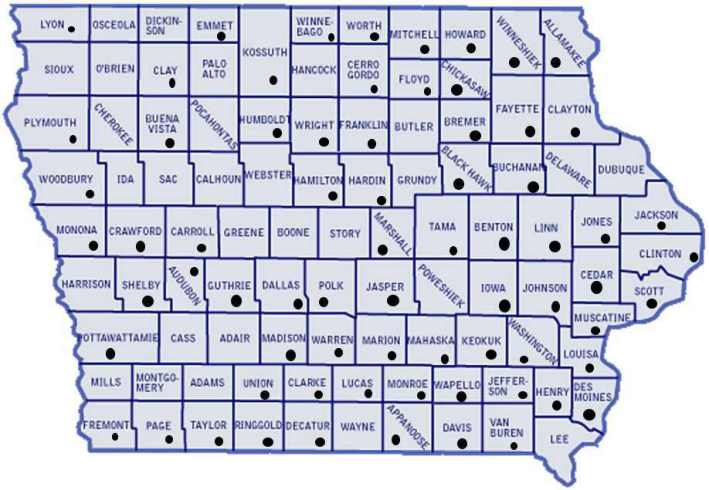 The Iowa DNA Project has almost doubled in size since the February Quarterly Roundup.  With our current membership, 72 of Iowa’s 99 counties are now represented by the DNA of Project Members.

Most Represented YDNA: R and its subclades followed by I and G

Most Represented mtDNA: H and its subclades.  Also represented are W, J, T, K and U

MyGroups has proven popular with members and is allowing the group to ask questions, interact and share surnames, locations, family background and photos.  A Links page is also available to help FTDNA users get a handle on their results, explore advanced topics, and access group updates.

The project remains focused on families with direct ancestry or collateral lines tied to Iowa. To make inter-group connections we rely on autosomal, or Family Finder data.  However, all appropriate testing is of value and encouraged and the project’s general statistics can be found here.

If you have ties to Iowa and have a Family Finder kit ordered or processed at FTDNA, you may join the project here.  We look forward to exploring the settlement patterns and make-up of Iowa as well as the continued growth of membership and number of matches within the group.

The Iowa DNA Project was formed at the end of November 2014 and is already beginning to paint a picture of  Iowan DNA.  While the project is for folks who have ancestors who lived in Iowa, or who have collateral lines who lived in Iowa, and our focus is on autosomal, aka Family Finder results, we also have members who already have or are in the process of having their mtDNA and YDNA tested.

Some of our project members have roots in Iowa going back almost 200 years. As of February 2015, descendents of settlers from most counties in Iowa are now represented, and this month will see additional results being produced, including those of a descendent of the bulk migration from Lippe, Germany to Allamakee County, Iowa.

New members are always welcome and are of course needed to move the project forward. 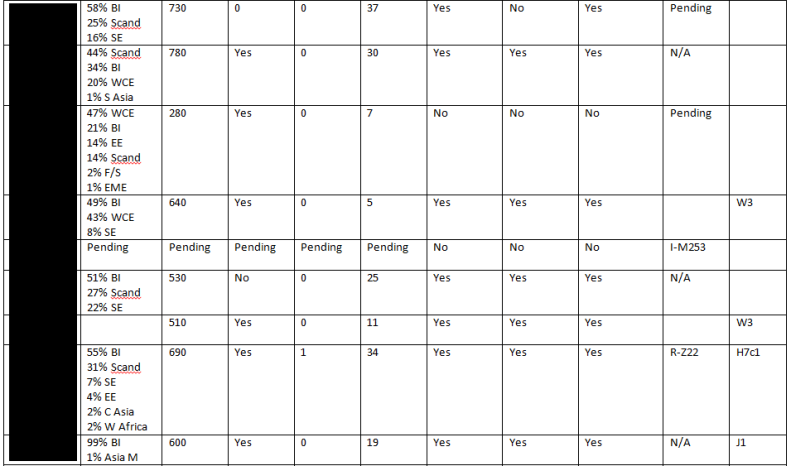 A few facts have already begun to present themselves:

According to MyOrigins the bulk of project member ancestry is from :

There is also a moderate representation of ancestry from Southern Europe and Eastern Europe, in that order.

Ancestry also represented but less common, in order, is:

All members are encouraged to upload their raw DNA to Gedmatch to expand their match lists and to take advantage of additional ancestral admixture tools.

To finish, I would like to express my admiration and gratitude that the vast majority of project members have done so much to help themselves make the most of their results by uploading their trees, surnames, and most distant ancestors.  Many have also recruited family to test and are joining other projects which will also help them with their research. I wish you all continued success and look forward to working with you in the months ahead.

We’ve all heard the phrase, “Respect your Elders.” However, when it comes to genetic genealogy, the importance of your family’s eldest generation takes on an entirely new meaning.  As your elders are closer genetically to your brick walls, they will get more, and better matches on those lines.

When testing autosomal DNA, testers can expect a certain amount of shared DNA, depending on how closely they are related.  The International Society of Genetic Genealogists has provided these figures for average family inheritance:

I descend from a large Irish family from County Mayo, Ireland.  In 1851, Henry Kane immigrated to Ohio.  His wife, Katherine Forrestal and their children soon followed, living in Ohio for a few years before they and their descendents settled in Iowa.  Eventually, they spread through Buchanan, Fayette and Bremer Counties.

My own line descends from Henry and Katherine’s third son John, a man remembered as being musical and having had a full head of lovely white hair.  John Kane was my second great grandfather, and when I checked my matches at Gedmatch and noticed a meaty match of 130 centimorgans, with a surname of Kane, I was intrigued.

I soon discovered my 130 centimorgan match was a descendent of John’s brother James Francis, and my 2nd cousin twice removed.  According to the ISOGG chart of average inheritance, we should have only shared about 53 centimorgans. As my Kane cousin also had several generations of his branch tested, we were able to conduct our own miniature study of familial inheritance and look for any other anomalies.

As each new family member’s autosomal results came in, they were entered into a spreadsheet comparing how many centimorgans each member had in common.   Although each generation inherits from the previous generation, due to recombination, successive generations may inherit much more from their maternal grandfather than their paternal grandmother or any other imaginable combination.  Each child in the same generation can inherit entirely different chunks of DNA.

From the above chart, you can compare the grandparents for each branch, Generation 1 to Generation 1, and see they match at 266.4 cm.  As second cousins, they share a bit above the 212.5 cm average.  However, when John’s Generation 1 descendent is compared to the 2nd generation of descendents from James Francis, a much wider range appears.  The average cms shared by 2nd cousins once removed is 106 cm yet the numbers are above that average at 132 cm and well below the average at 47 cm. 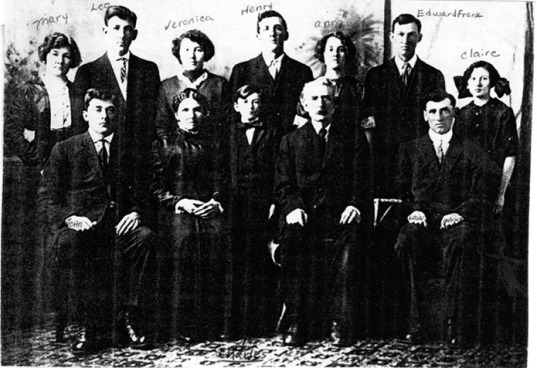 When my generation (Gen3) is compared against the 3rd generation descendents of James (4th cousins) an average of 13 centimorgans should be shared.   For two of my 4th cousins, we share slightly more.  For the other 4th cousin, there is no match at all, and rather than the expected 26 centimorgans shared with his mother (3rd cousin once removed) she and I only share 14 cm.

So, why is it urgent?

With only 50% of 4th cousins sharing enough DNA to show up on each other’s match lists, having that oldest generation tested can give you a serious leg up in your genealogical research.  Even within our small sample, without having had the grandparents from each branch tested, one of the grandchildren and one of the great children wouldn’t have matched the other branch of the family at all.   Had we not known how we were related and had we been forced to rely on reported sharing averages, no doubt we would have been confused by the estimate range and searching the wrong generations of our trees for our family intersection.

What can I do with it?

Having several generations tested allows you to put the shared centimorgan averages into the greater context of how much DNA each family member has inherited from each particular family line. More importantly, having your oldest generations test will give you more centimorgans to work with when determining how you relate to your more distant cousins. As your elders are closer genetically to your brick walls, they will get more, and better matches on those lines.  For example, the oldest generation in John’s branch has 321 more matches than the second generation, and 378 more matches than my generation.  Many of those matches are 4th cousins or further, which are exactly the matches we need to break through our Mayo brick walls.